Gangrape accused in "critical" condition, and why we should be critical of the same

It has been five months to the day, since the 23 year old physiotherapy student was gangraped on a moving bus in Delhi. She died two weeks later in a Singapore hospital, from the brutalities inflicted on her.

India then launched into a nation-wide process of introspection, with vociferous protests and even a change in laws related to rape. Also in this period, Ram Singh, the main accused of the six, was found hanging in his jail cell on the morning of 11 March. The case has been abated qua Ram Singh, and the State maintains that he committed suicide, while his lawyer alleges murder. The report on the same is yet to be submitted in the court. Today, the trial finished the examination of prosecution witness 74.

A second accused, is Vinay Sharma. A resident of Tihar Jail 7, he has been hospitalized since 3 May and has thus not been attending any of his hearings since. Now his lawyer AP Singh says that Vinay has been slowly administered "sweet posion" at the jail hospital where he had been admitted for a fever and chest pain and that his condition is "critical."

The case of Vinay requires concern- this is not the first time he has had a serious health issue since the trial began. The young man has had a particularly eventful five months. In March, the former gym instructor announced that he plans on writing entrance exams for the Indian airforce. His lawyer went to the extent of filing an application for him to be supplied with fruits and milk, which the presiding judge agreed to. A day before he was to write his exam, he was found to have a broken hand. He alleged that he had been tortured. The jail authorities said that he got into a fight with other inmates.

This time, Vinay's condition is even more serious. His lawyer reports that on the night of 2 May he was beaten on his chest. "Vinay told me that while beating him, the jail authorities said that they would beat him on his face, but the marks would show, and so decided to beat him on his chest," says Singh. He had been suffering a fever for a few days before that, and this coupled with the chest pain, had him admitted to the hospital within Tihar Jail. Instead of getting better, things got worse. The boy began vomiting blood. His lawyer says that Vinay has been receiving a "sweet poison" in his medicines consistently, since being admitted in the jail hospital. He has been transferred to three hospitals in two weeks and has been vomiting blood at all these places. Singh says that at Tihar and at the second hospital (Deen Dayal Upadhyay, a government hospital), the doctors seem to have made light of Vinay's sickness, calling it just a fever. A bail application for Vinay on the grounds of his ill health has been rejected by the court in Saket where his case is being heard. 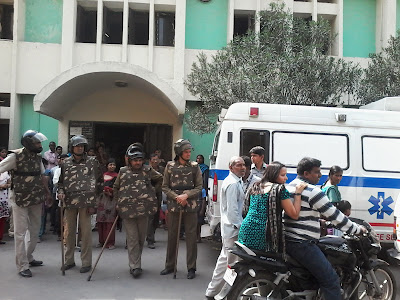 The medical officer at the Tihar jail has submitted a status report today on Vinay. It lists some of the efforts of and opinions made by doctors at Tihar and Deen Dayal Upadhyay Hospital. Tihar referred him to a government hospital citing "fever, sore throat and oral ulcers." The government hospital has provided a "provisional diagnosis of Pyrexia of Unknown Origin with Bicytopenia" and referred him to a third facility (Lok Nayak Hospital, also a government one). In the two days since he has been admitted at what is considered a specialist facility, there has been no accurate diagnosis of Vinay's condition besides that it is "critical." The report is expected tomorrow.

Allegations of torture of the accused within the jail have been made since the beginning of this trial. Akshay Thakur, another accused, has also just last week claimed to have been tortured. His lawyer says that the jail authorities report that he has been bothering other inmates instead.

Of the six accused of her rape, one is a juvenile, which means he will compulsorily receive a very light sentence, and his proceedings are ongoing at the Juvenile Justice Board.

After the suicide of Ram Singh, the sessions court hearing this case ruled for increased security to be given, and for the accused to be treated well so that they do not commit desperate acts that could lead to mishaps. But something is definitely amiss when the accused persons are found dead, with a broken hand, alleging torture, or alleging torture to the extent that leaves them hospitalized for two weeks with no convincing diagnosis. Is it not in the interest of their justice and ours, for them to be kept alive? Or is it normal for undertrials to fall away during due process? If it is, then does it not require critical concern?

Posted by kicking.and.screaming at 11:59 pm

I suppose it's very tempting to ignore the torture of serious criminals, because one feels like they're getting the justice they deserve in a quicker way. But we shouldn't accept that, because that lets our judicial system, and a whole lot of other national systems, get away with being slow and inefficient. If there are really doctors who are making light of a convict's illnesses then we have a serious problem. Doctors are supposed to do their jobs, aren't they? Unfortunately, it's not a problem that many would acknowledge or care to write about, because in their eyes rapists are rapists and don't deserve to be treated like human beings when it comes to health and food. On the one hand I agree with that, because once you rape someone you cease to be considered humane. But, when this leads to inefficiency in the judicial process, something needs to change.

If you don't know why you're here

My name is Mickey Sugarless. This blog is about India, the world, India and the world and social issues. Tuck your elbows in. Proceed in single file. And don't call me anything else but Mickey.

kicking.and.screaming
Chanting, ranting, bantering, squabbling, battling with myself, forever scribbling and noting down things in my thought pad.. I needed my soapbox.

This work is licensed under a Creative Commons Attribution-Noncommercial-No Derivative Works 2.5 India License.